Innovation has become a buzzword in recent years. Since at least the 1980’s, however, it has developed into a central issue for public policy scholars and policymakers alike. In several cities and countries, new institutions and mechanisms have been implemented in an ongoing attempt to modernize policy making and public service delivery. These ‘social innovations’, ‘political innovations’, or ‘innovations in public services’ have at first sought to improve efficiency and effectiveness in public administration and public services.

But as innovations evolve, the role that citizen participation plays on them evolve too. It soon became clear that innovations were relevant not only for public management, but also for democracy. Citizens’ demands for more participation have risen in the last few decades as consistently as have signs of political disillusionment. Representative democracy has found itself challenged by low electoral turnout, decreasing party membership rates, and small levels of public trust in its primary institutions of parties, parliaments and governments.

Reforms in representative institutions have not been enough to prevent democracy from being diagnosed with a crisis; nor to avoid discontented citizens from taking to the streets in protest. In order to improve democracy, institutional change could not be dissociated from citizen participation. Those willing to innovate, and not only reform, sought for a deeper and more discontinuous change: to involve citizens and civil society organizations in the political process, allowing them to play a role in the public policy cycle.

In many countries and cities around the world, and especially in Latin America, governments and civil society organizations, as well as international development agencies and private stakeholders, have been engaged in the experimentation with new forms of citizen participation in politics. These democratic innovations seek not only to enhance citizen participation but also to improve democracy.

Democracy is improved - or deepened - not only because participation increases, but because citizens engage with and become part of processes that seek to make governments more responsive and institutions more accountable, to strengthen the rule of law, and to promote social equality and political inclusion. Democratic governance in Latin America has been practiced as a form of participatory governance.

The Concept of Democratic Innovations

LATINNO assumes that citizen participation is not simply the end, but mainly the means of democratic innovations, which can take different forms like direct voting, e-participation, deliberation, and citizen representation. We believe that the ends of democratic innovations are the many dimensions of the quality of democracy, like accountability, responsiveness, political inclusion, social equality, and the rule of law.

We define democratic innovations as institutions, mechanisms and processes whose ends aim to strengthen at least one of the five dimensions of the quality of democracy through one of the four means of participation, and which can have impact on the policy cycle.

This means that all LATINNO cases must fulfill with at least three conditions: include citizen participation as a means, pursue one or more democratic ends, and have an institutional design able to impact on at least one of the policy cycle stages: agenda setting, policy formulation and decision-making, implementation, and/or evaluation.

Such an approach, which we call pragmatic (Pogrebinschi 2013), lies at the core of the LATINNO project. Our research shows that those many means and ends combine in different ways and that such experimentalism is characteristic of democracy in Latin America, where citizen participation evolves within the representative system without competing against it.

Below you will find a simplified definition of the means and ends of democratic innovations as investigated by LATINNO.

All forms of interaction in which participants have the chance to voice their positions and hear the position of others. Thus, a deliberative democratic innovation is usually an institutional design which allows participants to change their initial position through a communicative exchange. When it takes place online, deliberation requires a design that allows for mutual interaction (a give-and-take of positions, and not only the isolated voicing of demands).

All means commonly referred to as direct democracy instruments, namely referendum, plebiscite and citizens’ initiatives. These are broadly considered, as to include, for example, recalls (revocatoria del mandato), and non-binding plebiscites organized by civil society organizations. In addition to that, all forms of direct voting in which citizens have the chance to cast a ballot on specific issues (and not for candidates running for elections) fall in this category. These include consultations of citizens (consultas), both organized by governments or civil society organizations.

All forms of participation that involve information and communication technology (ICT). These include both digital (apps) and analogic (SMS) mobile devices. E-participation requires some sort of citizen engagement (often combined with forms of deliberation or direct voting), and not simply the open access to data or information.

All forms of citizens’ or civil society organizations’ engagement where they either a) have a seat in a governmental body or are assigned a role in the policy process (which may or may not involve decision making); or b) are selected or self-selected (instead of elected) to act in the name of other citizens or organizations, or to speak on behalf of specific interests (e.g. the environment), groups (e.g. minorities) or localities (e.g. neighborhoods). These include a broad range of forms of non-electoral representation, provided that citizens or civil society organizations act in the name or speak on behalf of others regardless of an authorization. Democratic innovations that involve forms of citizen representation may also internally reproduce traditional means of representation (election, delegation, voting).

All non-electoral forms of rendering governments, institutions, elected officials and representatives accountable, i.e. answerable and responsible for their actions and inactions. Democratic innovations aimed at enhancing accountability may carry out activities as diverse as the monitoring of institutional performance, the disclosure of public information, the sanctioning of public agents, and the oversight of public services delivery.

Forms of emission of signals from citizens regarding their policy preferences, and their corresponding reception by governments. Democratic innovations that aim at enhancing responsiveness provide spaces or mechanisms that allow both citizens to formulate and express their preferences and for governments to become aware of and take them into consideration.

All forms of law and rights enforcement, encompassing individual and public security, crime prevention and control, restraint of potential abuses of state power, independent administration of justice, conflict resolution, and access to justice. The assurance of political rights and civil liberties and the protection of human rights fall into this category too, which may also entail forms of constitution-making and law making.

Forms of recognition and empowerment of individuals, groups, and communities. Democratic innovations aimed at enhancing political inclusion, that provide space or mechanisms for the involvement, engagement, and expression of those that feel underrepresented, discriminated or marginalized.

Forms of improvement on the life conditions, wellbeing, and capabilities of individuals, groups, and communities. Different forms of fighting poverty and hunger fall in this category. Democratic innovations that aim at to enhance social equality and provide the space or mechanisms necessary for the inclusion of those who are in a disadvantaged situation. Social equality addresses social policies, economic rights, and primary goods, as well as possible forms of redistribution. 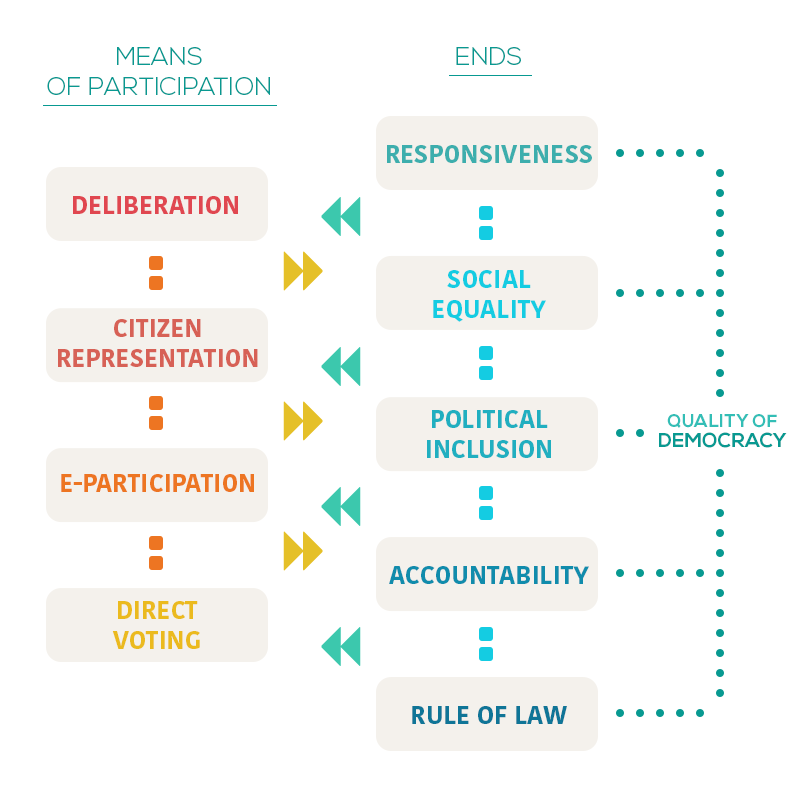 Adapted from Pogrebinschi, Thamy. (2016) “Comparing Deliberative Systems: An Assessment of 12 Countries in Latin America".
Paper delivered at the 2016 Annual Meeting of the American Political Science Association (APSA), Philadelphia, and at the 2016 General Conference of the European Consortium for Political Research (ECPR), Prague.