Every year, during #PrideMonth, we commemorate the 1969 Stonewall riots and their importance in the promotion and defense of the LGBTI+ rights worldwide. And even though this year most events and parades have been canceled, millions of people are celebrating the victories of the community in terms of decriminalization laws, recognition of same-sex marriage and adoption. These initiatives and spaces also contribute to collectively voice the many challenges that the community still faces and to raise awareness on the need for further and deeper non-discrimination policies.

While Latin America has taken some steps towards the protection of rights, there is still very much to be done for the full recognition and respect of the LGBTI+ community. For instance, only six countries in the region have recognized same-sex marriage: Argentina, Brasil, Colombia, Costa Rica, Ecuador and Uruguay. Despite the increase of legal protection for these groups, the LGBTI+ community still continues to be target of discrimination and hate crimes. In Mexico, for example, the National Observatory of Hate Crimes against LGBT People reports that during the current COVID-19 pandemic at least 25 trans people have been murdered.

In this context, this month’s newsletter focuses on participatory initiatives that push towards the recognition, respect, and full compliance with the rights of this community in Latin America.

The International Lesbian, Gay, Bisexual, Trans and Intersex Association for Latin America and the Caribbean - ILGALAC (Span. Asociación Internacional de Lesbianas, Gays, Bisexuales, Trans e Intersex para América Latina y el Caribe) has established an Electoral Observatory, which serves as a citizen oversight mechanism, to continuously monitor major elections in the region. Its objective is to produce analysis and reports about candidates’ proposals on relevant issues for the LGBTI community. These include the protection and recognition of the rights of people of diverse sexual orientations and gender identities, their position on decriminalization laws, and specific non-discrimination policies. Overall, this initiative aims to promote informed voting among the LGBTI community members.

In 2019, the Electoral Observatory monitored the presidential electoral processes in Argentina, Bolivia, Guatemala, Panama, and Uruguay. For its Guatemala report, ILGALAC partnered up with the National Network for Sexual Diversity and HIV - REDNADS (Span. Red Nacional de Diversidad Sexual y VIH) to oversee the two-rounds presidential campaign. When analyzing the position of then-candidates Alejandro Giammattei (Vamos) and Sandra Torres (UNE) regarding LGBTI rights, ILGALAC found that both candidates were highly opposed to addressing any LGBTI priorities in their campaigns, and when asked in public media about the topic both shared highly negative opinions towards the rights of the LGBTI community.

In 2010, Argentina was the first Latin American country to recognize same-sex marriage. Two years later, in 2012, Bill No. 26.791 modified the Criminal Code to punish with life in prison hate crimes motivated by sexual orientation and gender identity. In this context, in 2016, the National Observatory on LGBT Hate Crimes (Span. Observatorio Nacional de Crímenes de Odio LGBT) was created to monitor and make visible all types of violence against the LGBT community that may constitute hate crimes. These are crimes committed by perpetrators with the sole intention of targeting victims who belong to a particular social group and discriminating them on grounds of sexual orientation, expression and gender identity.

Created by the Anti-Discrimination Institute of the Ombudsman's Office of the City of Buenos Aires, the Argentine LGBT Federation, and the National Ombudsman's Office, the Observatory also seeks to influence the formulation of legislation and public policy regarding the prevention, punishment and eradication of hate crimes against the LGBT community. In its 2019 report, the National Observatory made some urgent recommendations for the State which included: integral reform of the Law Against Discrimination, training to the national security forces on topics of human rights, sexual diversity, and non-discrimination, as well as the adoption of nationwide educational campaigns for the LGBT community about their rights and access to public services.

By April 2020, the International Monetary Fund reported that the COVID-19 pandemic had significantly weakened Panama’s macroeconomic outlook for the year and caused a gap in the balance of payments of about US$3.7 billion. In this context, the Ministry of Labor Development of Panama (Span. Ministerio de Trabajo y Desarrollo Local) convened a Round Table for Economic and Labor Development to be segmented into three different commissions. Its purpose: to have a national dialogue and agreement on the policies to be implemented as a response to the COVID-19 pandemic and to prepare for its aftermath in the economic and labor realms.

Representatives of several workers' organizations, labor unions, the business sector, and the central government participated in the roundtables which took place over the course of 60 days, 90 meetings, and 900 working hours. By June 2020, the three Commissions validated 23 agreements in consensus and submitted an official report to the Minister of Labor Development, Doris Zapata. Some of these agreements include, among others, the temporary adaptation of the working day, the creation of specialized health and safety committees to draft measures to prevent the contagion and safeguard the health of workers, employers, and their families.

Some days ago we sent out a special Newsletter around to disseminate the results of a mapping that our team conducted during June and July. We identified 300+ participatory and citizen initiatives combatting the effects of the COVID-19 pandemic in Latin America for the 18 countries that our project contemplates, as well as many others taking place transnationally or simultaneously in several countries.

The website is currently available only in Spanish, but we hope to have an English version available soon - and welcome any volunteer efforts to that end! 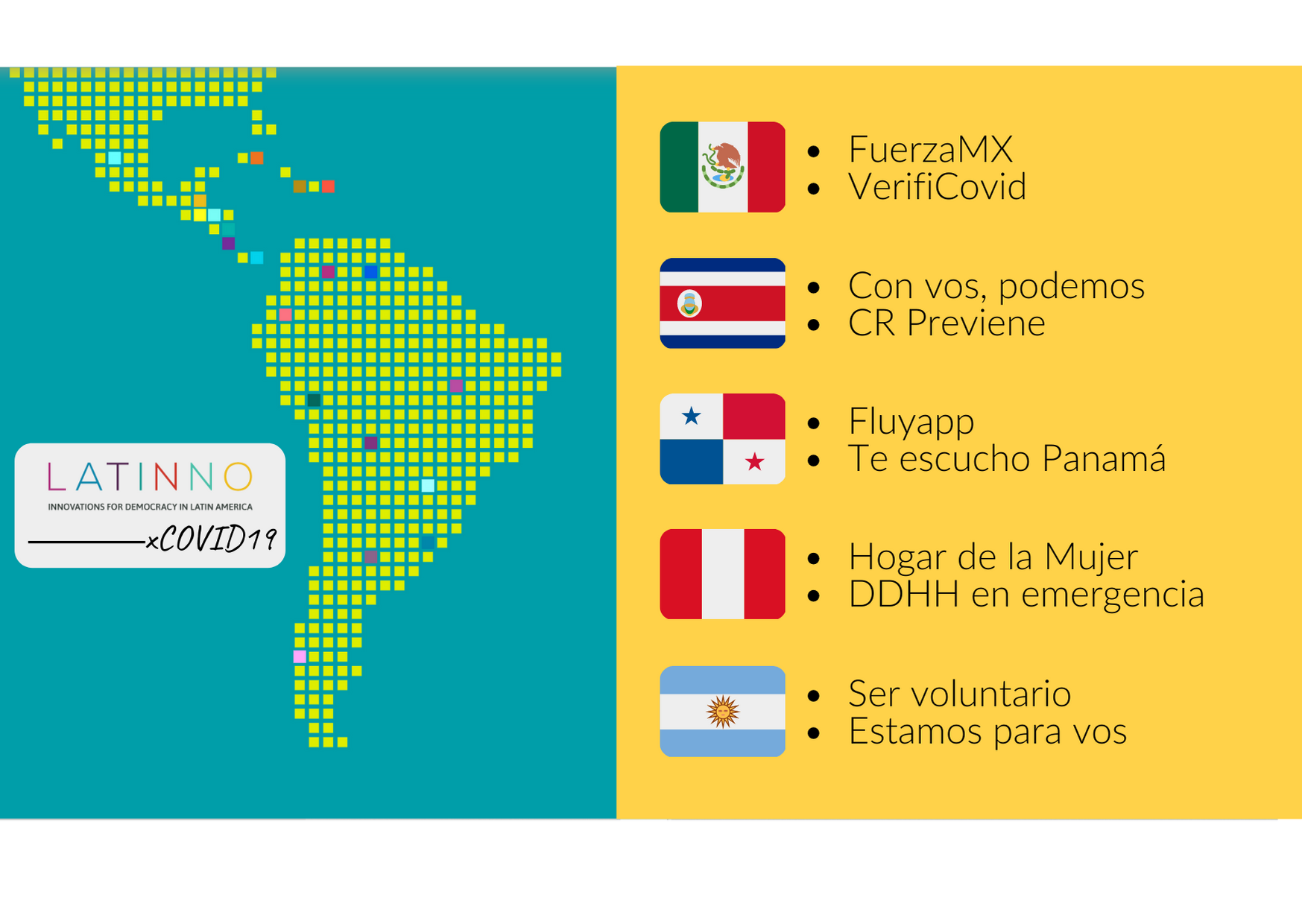