Digital technologies have rapidly evolved in the last 30 years, facilitating internet access and increasing the use of computers and mobile devices around the world. According to the World Bank, Latin America is the fourth largest online market globally, with 62% of the regional population having access to Internet. In this context, citizen participation is being transformed by these new technologies, forcing governments and authorities to adapt their democratic processes to these constant technological changes and challenges.

Developing technologies are reducing communication barriers between citizens and authorities, fostering direct and easy-to-access channels that connect governments with the population. This month, our newsletter focuses on participatory initiatives and democratic innovations that promote the use of digital tools among citizens as a way to directly voice their demands and express their opinions and needs to governments, leaders and public institutions.

On May 3rd we held the first of a series of meetings with civil society organizations in Latin America. This first meeting was co-organized by OpenDemocracy and the Open Society Foundations’ (OSF) Latin America Program. On a cloudy Friday morning in Bogotá, Colombia, we visited the OSF offices to present the project, the methods, and the most recent trends in our region-wide dataset on democratic innovations.

Many representatives from civil society organizations active in the fields of participation, innovation and digital democracy attended the meeting. We thank Expolitico, Wingu, Datasketch, Ford Foundation, Movilizatorio, RandomMonkey, Policentrico and everybody else for their time and enthusiasm about the project, and hope for more future collaboration with each other. If you're in Colombia or in the Bogotá area, do not miss these organizations' projects and news!

Stay tuned for upcoming LATINNO talks in Brazil, Uruguay and Argentina in the next few months. Make sure you are updated by following us on Facebook and Twitter.

“Decide Veracruz” is a digital platform implemented by Veracruz’s Municipal Council with the aim of engaging citizen participation in the different processes and initiatives inside the municipality. To access the platform, citizens have to register themselves as users so they can be enabled to comment and propose their opinions regarding the initiatives intended for the city. Once registered, citizens can participate via public meetings, digital debates, or through the concrete suggestion of proposals in the platform to be analyzed and considered by the authorities for their future implementation.

The objective of the initiative is to promote collaboration between citizens and municipal authorities, encouraging the involvement of the former in the community’s projects and activities, and increasing transparency and trust towards the government. Most of the currently active participation initiatives focus on urban management and formal protocols to be applied to local authorities, such as the Code of Ethics for public officials. 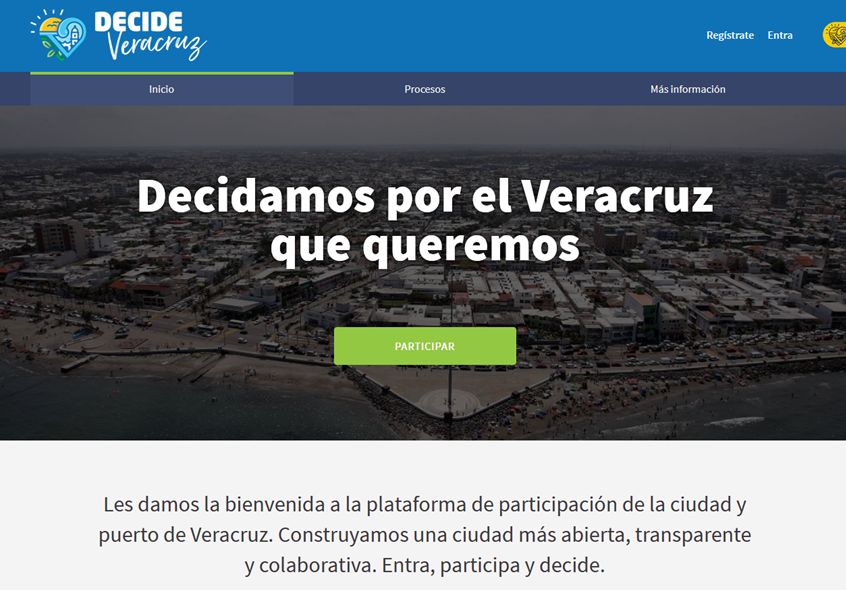 The  "Citizen Innovation Lab of Montevideo (MVDLAB)" is an initiative implemented by the Montevideo City Council with the aim of developing collaborative projects through active citizen participation. Through the use of different platforms that promote various forms of citizen participation, the MVDLAB fosters the exchange of ideas between authorities and citizens, to derive this interchange in collaborative projects to be experimented and developed.

The MVDLAB launches different calls that focus on various topics; however, most of the topics are directed towards the solution of the urban challenges of Montevideo, as well as other community-related problems.

In the third phase, the updated version of the “General Principles” is presented to the citizens, who can evaluate and comment the new document. Finally, during the last stage, the new comments and observations are analyzed and incorporated to create a final version of the “General Principles of Artificial Intelligence for the Digital Government”. It is important to highlight that the submission of citizens’ comments and observations is done digitally through a virtual platform in which participants are requested to register. For this particular case, participation from nationals and foreigners is equally welcomed.